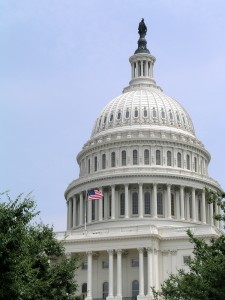 You’ve likely heard by now the story of freshman Louisiana Congressman Vance McAllister (R-La.) kissing one of his staffers.  Now, Rep. Jackie Speier (D-Calif.) is trying to make it so that Representatives and their staffs have to undergo mandatory sexual harassment training.

Unlike the rest of the federal government and many private companies, there is no specific requirement in place that requires U.S. Representatives and their staffs to receive sexual harassment training.  And unlike many of your own workplaces, there aren’t posters and signs in break areas reminding workers of regulations and how to report unwanted conduct.  Many offices don’t even discuss sexual harassment policies at all.  The Senate has training courses for new employees, but several different policies can apply.  The House has no training schedule, but has handbooks.

Frustrated by the seemingly haphazard way these regulations have been put in place in Congress, Rep. Speier said “This is the House of Representatives, not a frat house.”  She continued, “it is time for all of us to get trained – elected officials and their staffs – to recognize what sexual harassment is, and how to prevent it, and what to do if it happens.”  Other lawmakers have expressed concern about these kinds of problems in the past.

END_OF_DOCUMENT_TOKEN_TO_BE_REPLACED

Published right before Thanksgiving, the 2013 fall federal agency regulatory plans help to illustrate what proposed and final rules are on the agenda for the coming months.  The regulatory plans and fall agendas highlight agency priorities and goals and give a preview of future developments in federal employment law.

At the Department of Labor, the agency in general is focused on its “Plan/Prevent/Protect” initiative, which is designed to lessen the agency’s enforcement and inspection burden by issuing rules designed to put the responsibility for ensuring workplace compliance on the employer or regulated entity (such as a union).  Among the DOL’s subsidiary agencies, OSHA is working on publishing final rules that will establish standardized procedures for filing whistleblower complaints under a number of federal statutes, as well as updating workplace infectious disease standards.  The Office of Labor Management Standards will probably publish some version of its controversial “persuader rule,” which would greatly expand the types of union-related activities that trigger employer reporting requirements.  The Office of Federal Contract Compliance programs will continue to update its revised affirmative action requirements, as we covered here earlier, and will likely provide updated sex discrimination guidelines.  Finally, the Wage and Hour Division will be updating its definition of “spouse” to conform to the Supreme Court’s decision in U.S. v. Windsor.

At the EEOC, the agency plans to issue an updated rule increasing the monetary penalty for violations of the agency’s notice posting requirements under Title VII and the ADA.  The NLRB may move forward with a rule that will significantly change pre and post-union election procedures.  An earlier version of the rule was stayed after litigation found it invalid.  Lastly, the Department of Health and Human Services is going to be publishing rules implementing the Affordable Care Act’s non-discrimination provisions, which provide protections against discrimination in health programs and by activities of covered entities.

END_OF_DOCUMENT_TOKEN_TO_BE_REPLACED

The EEOC has filed 12 religious discrimination lawsuits in fiscal year 2013, more than in the previous year, and indicative of the increasing attention being paid to it in recent months.  In general, this may be one of the areas of more frequent activity in employment law in the coming years.

Under Title VII, employers are prohibited from discriminating against employees or applicants based on religion.  Concurrent with that prohibition is a responsibility to reasonably accommodate an employee’s religious beliefs.  The EEOC has recommended that employers avoid challenging the validity of an employee’s religious beliefs, and instead argue that accommodating the belief constitutes an undue hardship.  The article notes that between 1992 and 2007 religious discrimination claims increased by 100 percent, and that the EEOC has taken notice and increased its steps to educated employers about prohibited practices.  In 2012 the EEOC received its second-highest amount of religious discrimination complaints ever.

Some of the religious discrimination cases filed by the EEOC can provide employers with lessons in what conduct is prohibited.  Many of the cases concern refusals by employers to accommodate specific requirements of a particular religion, such as growing a beard, not working specific days or hours, or wearing particular clothing.  Others involved the failure of an employer to allow an employee to use equipment that did not violate her religious beliefs, or company-wide mandatory attendance at a religious presentation.  Most of these seem easily remedied- as none involved essential job functions or could not be accommodated with some minimal degree of creativity.

END_OF_DOCUMENT_TOKEN_TO_BE_REPLACED

Our first article this week has an interesting look at FMLA

in the prior year.  In particular, the

END_OF_DOCUMENT_TOKEN_TO_BE_REPLACED

For our lead in this week, the Employment Discrimination

problem even when it is not committed by supervisors or co-workers.  Basically, an employer is under an obligation

END_OF_DOCUMENT_TOKEN_TO_BE_REPLACED

In one of last week’s biggest cases, the New York Court of

END_OF_DOCUMENT_TOKEN_TO_BE_REPLACED

With no big news this week (other than the never-ending

shutdown), here are some interesting articles and links.  With FY 2013 ending last month, the

END_OF_DOCUMENT_TOKEN_TO_BE_REPLACED

With the federal government shutdown the big news today, I

impact enforcement and litigation of employment law issues at the federal

END_OF_DOCUMENT_TOKEN_TO_BE_REPLACED

This blog has previously covered the EEOC’s attempt to

END_OF_DOCUMENT_TOKEN_TO_BE_REPLACED

of the Supreme Court term, I first wanted to touch on an international article

that shows the U.S. does not have a monopoly on failing to protect employee’s